After 10+ months of engineering, coding, and building, I’m ready to debut my latest interactive robotic sculpture! “The Circadian Machine” is a fully mirrored geometric pod that can sense motion, displays undulating lights and sound, tells time, and alter its actions based on each day’s sunlight cycle. The idea started when I saw a note left in a museum during my time at an artist residency in Dresden, Germany. It said, “I wish time slowed down when I was having fun.” Although the pandemic has veered the original concept into a totally different direction, I’m exceptionally proud of the regenerated ideas and execution that came to fruition in this piece.

Through an amazing partnership between the Columbus Museum of Art and the Greater Columbus Arts Council, it will be on display at the museum’s Greater Columbus exhibition soon. There are so many fun Easter eggs packed into this piece that they each deserve their own explanation. Let’s dive right in!

Playing With Time & Daylight
A handful of programmable circuit boards control all the actions. There’s an onboard real-time clock that triggers a display of lights and sounds each time the hour changes. Another board connects to Wi-Fi and locates the sculpture anywhere in the world. With that knowledge, “The Circadian Machine” figures out the time of each sunrise and sunset in that specific location and builds additional actions during the daylight hours. As the seasons and available daylight hours shift each day, so too does the time between special features. In this way, this sculpture’s circadian sleep/wake cycle is nyctinastic (or responsive to the onset of day and night).

Most of “The Circadian Machine’s” life exists between sunup and sundown and during that time it dynamically performs nearly 50 actions. Twenty-four of them represent what would happen if you shrunk the whole day into the window of time that the sun was up. While the ‘Normal Hour’ actions happen every 60 minutes the ‘New Hour’ actions might happen, say every 32 minutes.

For this robot, Solar Noon (the moment the sun is at its peak height) is also worth celebrating. Like the sunrise and sunset, solar noon is also different each day depending on the coordinates of the robot. Why not show a display of lights and sounds here too?

The final action is a special ‘Hello’ from me, the artist. I can activate a special sequence of lights and sounds from anywhere in the world. Whoever happens to be in the gallery at that moment will get a unique experience that doesn’t happen every day.

Light Displays & Choices
Each event (motion-activated, Normal Hour, New Hour, Solar Noon, & Hello sequence) has a special color choice and pattern. Custom color palettes were sampled directly from or inspired by memorable travel experiences I’ve had. You’ll get see vibrant greens taken from the mountain grasses of the Swiss Alps, the rust-colored roofs dotting the German city in which I lived, the candy-colors of Cuban Cocoa-Taxis, and the awe-inspiring magenta and orange sunsets of the Californian coast. Just to name a few. Regardless of the time of day, when the robot senses motion it sends a wave of these color palettes to the LEDs at various pulsating speeds.

Similar to a normal clock, “The Circadian Machine” also has a Normal Hour chime. On the hour, a white light fades in and out corresponding to the 12-hour clock time. The brilliance of the white light also increases from a cold blue-ish white to a brilliant white light the closer it gets to each 12th hour.

During the portion of the day when the sun is up, the New Hour features also have a light show. Each strip of LEDs light up linearly with a bobbing-trailing effect, similar to a stereo equalizer. Starting from one end of each strip, a white streak of light is quickly followed by a bounce of rainbow colors. Each bounce counts up the New Hour, this time using the 24-hour clock. This is a nod to the time-keeping models used in many other parts of the world. When this time-keeping sequence reaches 24 bounces, it’s time for the machine to put the special functions to sleep.

The Solar Noon chime has a full and lengthy display of reds and oranges, mimicking the fiery flicker of the sun.

And of course, the special Hello sequence. The longest of all light displays, it first pulses white to alert viewers that something is about to happen. Then it alternates patterns between sessions of icy blues to otherworldly hues of pinks and greens.

Sound & Music
There is a lot hidden in each musical chime, so I’ll walk you through it. I composed a piece for each hour’s change. As the beat of the chime counts out 1-12, the song builds to be more complex and nuanced. In music theory, there’s a tool called The Circle of 5ths. It’s a 12-positioned wheel that represents the relationship among the 12 tones (or pitches) of the chromatic scale, their corresponding key signatures, and the associated major and minor keys.

Each of “The Circadian Machine’s” chimes are layered chords that arpeggiate (or rise and descend in order) corresponding to the clock position on the Circle of 5ths. In the morning, the music runs around the clock using the warmer major keys, while PM hours are in darker minor keys. Additionally, you can hear soft echos rising in the background during AM and falling in the PM.

The soft tones of a marimba strike out the Normal Hours. For the New Hours, I’ve added more layers of piano and harp to the marimbas.

Solar Noon only happens once a day. As it is the midway point of both halves of the sun cycle, it’s the time each day that you can hear all 24 major and minor chimes of the New Hour song.

During the special Hello sequence, there is no music. Instead, the sounds of the wilderness slowly fade in. You can hear birds chirping, water rushing, and foliage rustling. I wanted to separate my hello from the markings of time, as it could happen at any moment during the day.

Motion-Reactive
Two motion-sensors react to body heat and activate snippets of light shows any time the machine is turned on.

Inspirations & Appearance
The Circadian Machine is part of a larger series called The Living Machines. They are interactive robotic installations that mimic the emotional nuances of living organisms through light, motion, and/or sound. This piece feels the joy of daylight and responds with exuberance. The Circadian Machine partners art with philosophy, science, technology, and time. After months of research and hundreds of designs, I settled on a truncated hexagonal bipyramid. This form was a blend between the bell-shape often seen in plants, the segmented radial designs that are everywhere in CERN’s Large Hadron Collider experiments, and the futuristic utility of a reentry capsule found on an astronaut’s spacecraft.  This is in some ways, a sister piece to “The Shy Machine”, a much smaller sound-reactive machine that opens and closes depending on ambient sound levels.

Built-In Disability Friendly
After debuting a few light installations to the larger public in museums (including a real airplane wing that lights up and connects to NASA), I felt a responsibility to create something that could be appreciated by everyone, including the under-represented art-enthusiast with disabilities. With lights and sound already addressing the auditory and visual senses, the next design challenge was to create something that would be wheelchair accessible that also holds up to my conceptual theory. To achieve this, the mirrored pod has a low ground placement and a tilted mouth angling towards the viewer rather than directly up. People with various vantage points can now easily gaze into the pod from whatever position feels the most comfortable.

This piece has been made with the help of grants through the Greater Columbus Arts Council, the City of Columbus, a partnership with the Columbus Museum of Art.

{To see the finished piece in action, click here}

A special thanks to:

Special Thanks to Greater Columbus Arts Council, The Columbus Museum Of Art! 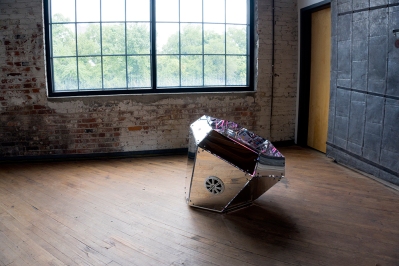 “The Circadian Machine” (side view)

“The Circadian Machine” (side View) 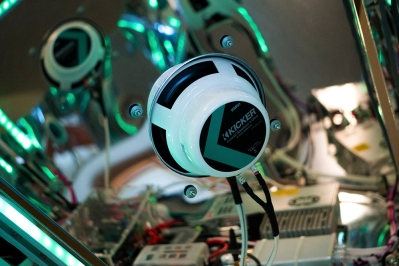 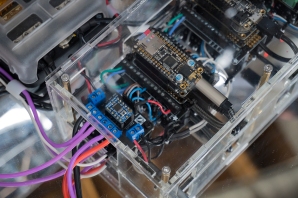 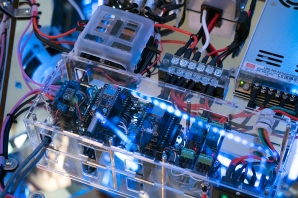 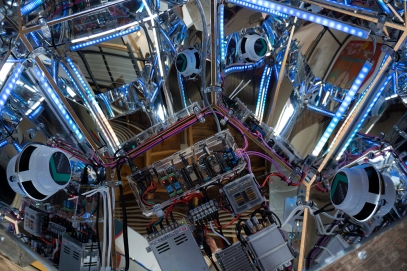 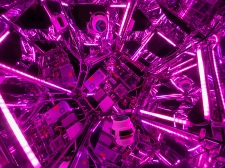 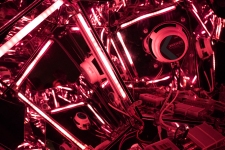 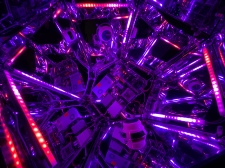 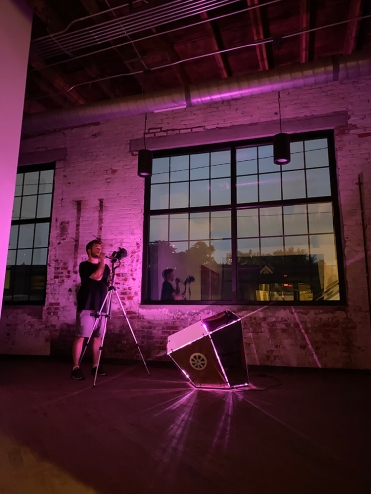