The Brothers Get a Sister, And She’s A Cutie!

A few weeks ago I debuted The Brothers, seen here. Today, I announce their sister. Like her brothers, “Purple Sister” is another large-scale cut-out made from the top of a vintage secretary desk. Her surface is made from an oak laminate and has been freshly sanded. The original top had some very serious dents and scratches that had to be worked around. Check out the process gallery below.

END_OF_DOCUMENT_TOKEN_TO_BE_REPLACED

ToeHeads Get A Pair Of Brothers

The latest ToeHeads to come on the scene are brothers. These 2 characters are large-scale cutouts on reclaimed wood that has been salvaged from an old secretary’s desk. With freshly sanded walnut surfaces, these colorful siblings have plenty of new life to roar about. Of course, we all know that they’re not as ferocious as they might think. 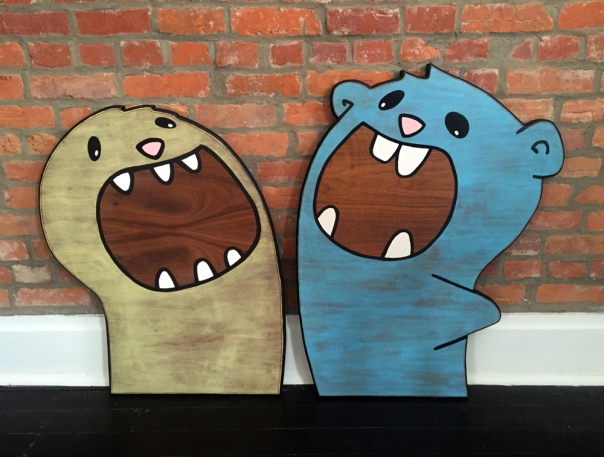 It’s a big weekend here in Columbus, OH. The NHL All-Star Game has come to town and Columbus is a willing host. With a trucked in 34-foot tall, 85-foot wide snow slide that is as fun as it sounds, national news coverage, and high society events planned for each night, it’s easy to see how the city is abuzz with high impact energy. The 8-10,000 out-of-towners estimated to trickle in over the weekend will have their fill of sports, events, and most importantly charitable benefits. I had the pleasure of participating at such an event Thursday night on behalf of the Columbus Blue Jacket Foundation to fight pediatric cancer.

The first thought that comes to mind when you hear NHL isn’t probably “cancer fighters”. However, the Columbus Blue Jacket Foundation has worked tirelessly to challenge this notion. Thursday night’s “The Crease” Speakeasy reportedly brought in over $600,000+ in aid. In addition, they teamed up with Nationwide Children’s Hospital for further impact. This included the purchase of one of my ToeHead illustration (painted live at the benefit) which will then be donated to the Nationwide Children’s Hospital as part of the atmosphere in their Family Resource Center. Please read on for more details and a slight tell-all about how this hits home for me.

END_OF_DOCUMENT_TOKEN_TO_BE_REPLACED

The ToeHeads are a group of illustrations that imagines what the world would look like full of characters made from big toes. They live, work, play, and explore in all the fun and crazy ways we do. Join them as they play out their lives in all the complexities of our world and beyond.

Want To Exhibit The ToeHeads?